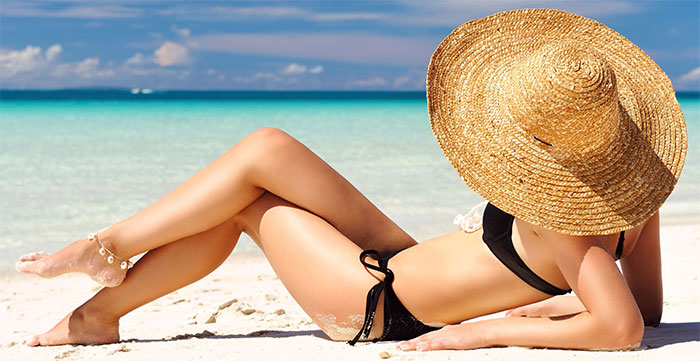 Summer is the season for the popular activity (or non-activity) of sunbathing, and most strive to look browner than the next bloke or more gold than the golden girls who have dared to bare parts of their anatomy which have not seen the sun for about eight months.

As a nation we are fond of our image of being healthy, suntanned, sports-loving people, and it is unlikely that we can be persuaded to change this view, but we could take a closer look at reality.

Playing sport, swimming and surfing, getting lots of exercise and fresh air are healthy, taken in moderation. Spending your spare time lying down being bombarded with ultraviolet rays from the sun is not. Sunshine is a source of some important vitamins, but the weekly “dose” should be measured in minutes rather than hours.

Skin cancer is the greatest risk for people with fair skin. So it is worth knowing some facts about the sun under which we live for a large portion of our lives.

Sunlight is made up from radiations of various wavelengths, and the short, ultraviolet rays are the one likely to cause damage. Being of shorter wavelength than the warming infrared rays, ultraviolet rays do not penetrate the atmosphere with much effect unless the sun is more or less directly overhead. You don’t tan or get sunburnt when the sun is low in the sky, so by planning your day properly you can minimize the danger.

In summer from 10am to 3pm you can be sure the ultraviolet rays will be doing their “changing act” on your skin. As you go north the rays can reach you with a good bit of power for most of the year, and for longer periods each day.

This “changing act” includes the premature aging of the skin, with many people developing unsightly hard, scaly areas on exposed parts. These are not skin cancers, but sunspots. True skin cancer is much less common.

In cold countries far from the equator, ultraviolet rays are no worry, even at midday, they just don’t get through the long stretch of atmosphere. In the Middle East people obviously knew a thing or two when they adopted veils, yashmaks and top-to-toe drapery.

One discovery which turned up in research for this article is that a suntan is itself a form of protection. Gently acquired, a tan blocks ultraviolet rays and prevents dangerous burning, for those among us who do tan easily. However, those who are most at risk cannot tan anyway, and must use effective sunscreens.

Tanning is the process of the ultraviolet rays causing melanin-containing cells in the skin to become darker. They also cause the skin to produce extra melanin. So skin which is a bad “melanin-producer” will not tan properly. People with very fair skin, people who freckle, may never produce a really effective tan although they burn very easily.

But even olive-skinned or deeply tanned people need to be careful. Tanned skin does not give 100 percent protection, and even Aborigines and Papua New Guinea natives have been known to develop skin cancer.

A point to remember, though, when acquiring that first tan is to be wary with sunlamps, which have become as fashionable as having the tan itself. If used sensibly they can brown a body gently

READ  The Best Tips on How to Increase Fertility
so that the summer starts with a good bit of protection from sunburn.

But the risk of burning from misusing a sunlamp is far greater than from misusing the sun. The sun gives you warning by making you hot and uncomfortable. You don’t get this kind of reminder from a sunlamp, which gives off very little heat. For safety with a sunlamp you must keep a close eye on time under, and distance from. Above all, do not fall asleep under a lamp, or in the sun. The results are disastrous.

The most important is care for your eyes if using a sunlamp. Goggles are a must. Ultraviolet rays can damage the eyes, and if you cannot read while wearing goggles under a sunlamp, do not read. Other protection. While covering up is the best protection of all, many preparations are available which screen out harmful rays.

Sunburn preparations indicate that one has failed in one’s protective care. Tanning preparations should be used only by those people who know they can acquire a suntan without pain or other distress, and screens should be used by all babies, children and the sensitive-skinned fair folk who cannot brown.

These three types of preparations are usually grouped on counters or shelves where they are sold, and a greater awareness of the differences is needed.

Advice from experts is to choose a water-resistant protection, of whatever kind, and rub it into a dry skin. Applied to a greasy or damp skin it will simply float off next time you perspire. Apply more every hour or so, and after you have been in the water.

Prevention is always better than cure. Whatever you use, use plenty. A thick layer is more effective than a thin one. Danger spots are pale areas, patches of skin damaged by injury or sunburn, children’s cheeks, everyone’s nose, and father’s bald head.

Tanning is a natural process for most, but we can only tan to the degree allowed by our genetic makeup. Corns, callouses and scar tissue are also natural, they are bodily defence mechanisms against various types of irritation.

If you work in the sun think of it as an occupational hazard just like any other that requires protective clothing of some sort. For girls this could take the fashionable form of casual long dresses, and big floppy hats are returning to vogue. Men also should cover up during danger time (10am to 3pm), and if the lifestyle totally rejects the concept of the siesta, at least we should try to stay under cover during the noonday hush.

Now, moles. Probably everybody has at least one mole somewhere on the body, but not a malignant one. An ugly, hairy mole is usually harmless. The common tan moles, or reddish birthmarks, almost never become cancerous, but any increase in size, change in shape or deepening of colour, or bleeding of any mole, whatever colour should be checked by a doctor.

interesting studies on natural remedies, health benefits and side effects of foods, articles from experts on fitness, healthy eating and living.
This site uses cookies: Find out more.